Who knew that the now posh Cherry Creek neighborhood filled with its high-end custom homes, live-work-play developments, bountiful retail boutiques and premier shopping and tourist destination – Cherry Creek Shopping Center, was a barren landscape inhabited mainly by truck and dairy farmers?  In the mid 19th Century, Cherry Creek was its own town, Harman, established by Edwin Preston Harman.  Mr. Harman was born to a slaveholder’s family on November 27, 1934 in South Carolina.  He grew up in Mississippi where he graduated college in 1858 and then served as a Confederate officer in the Civil War and was later appointed a Mississippi judge.  Harman, unhappy with reconstruction, headed west where he discovered Denver and a 320-acre parcel bounded by First and Sixth Avenues and University and Colorado Boulevards.  Harman staked claim to the land in 1871 hoping to settle freed slaves and create a plantation for himself, however, this never happened.

By the early 1880’s, a few residents, mainly farmers, were calling the Harman Land home.  After a failed attempt at getting the land annexed to Denver in 1882, the town was platted in 1885 when feeling the pressures of growth.  Mr. Harman eventually incorporated his land as the Town of Harman on November 17, 1886.  This allowed him the ability to provide the small community with basic public services, roads, streetlights and other amenities.  It also gave Mr. Harman the ability to provide “protection against tramps, bums, bummers and the Liquor traffic” and control the “undesirables” who frequented the Smoky Hill Bars and an area called The Grove.

Smoky Hill was an area near the Smoky Hill Trail along the banks of Cherry Creek where roadhouses were common, and The Grove was land near Cherry Creek and South Steele Street.  The Grove was filled with cottonwoods and was a favorite rural picnicking spot, location for religious revivals, gypsy encampments, and hangout for the homeless.  Residents of Harman hoped that by incorporating as a town, they would be sure to chase the troublemakers out of the Smoky Hill Bars and The Grove.

In the late 1880’s town improvements, such as sidewalks, gutters, and curbs were underway to serve the population of around 500 people.  The town of Harman had the Harman School at the southwest corner of 4th and Columbine, later to be incorporated into Denver Public Schools and changed to Bromwell Elementary.  They also had a Harman Town Hall, built at the corner of E. Fourth Ave. and Saint Paul St. in 1891.  It was designed by Kidder & Humphreys Architects and served many purposes over the years such as The Denver Mayor’s Office, Police Magistrates Office, Marshall’s Office, Jail, the volunteer Fire Departments Horses, Cart and Hose room, Town Board’s Meeting Chamber, library/reading room, and a public hall seating 300 people. It was later sold as a Masonic Lodge.  In 2009, the building was fully renovated and restored to its original “Denver Square” charm with the intent of being sold as a private modern residence. 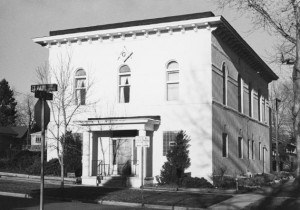 Unfortunately, the town of Harman went bankrupt after the economic crash in 1893 and after having no other options became part of Denver in 1894.  From here, the Cherry Creek parcel grew in popularity, as the Mile High City continued to grow east.  Temple Buell, renowned architect, seeing opportunity purchased a 57-acre parcel, formerly a garbage dump, in 1925 with the intent to design and build the Mile High City’s first suburban shopping center.  An economic depression, World War and eventual zoning hassles delayed construction of the shopping center just over 20 years.  Finally in 1950, ground was broken and the main anchor, a three level Denver Dry Goods Department Store opened in 1953.

The Cherry Creek Center served as a catalyst for further commercial development in the surrounding areas.  A Sears and Roebuck was built North of the mall in the mid 1950’s, along with an underground tunnel to safely transport shoppers from one side to the other of First Ave.  The Cherry Creek Center was eventually redeveloped from 1986-1990.  The all-new Cherry Creek Mall was officially dedicated on August 17, 1990.  It offers a premier shopping environment with stores such as Nordstrom, Tiffany & Co., Neiman Marcus, Burberry, Michael Kors, Ralph Lauren, Macy’s and Free People.  As the Mall site was revitalized, the area north of the Mall started to attract developers looking to build luxury condos and duplexes. 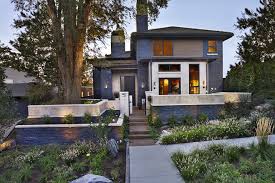 Cherry Creek North underwent a major redevelopment with the construction of high-end condos, attached single-family homes, multi-million dollar single family residences and large -scale, live-work-play developments.   These newer developments sit beside some of Denver’s more traditional Denver Squares and Bungalows built in the earlier expansion of Denver to the East.   Anchored by the Cherry Creek Shopping Center and the 100’s of boutiques, galleries, restaurants and spas of Cherry Creek North, Cherry Creek is now one of Denver’s most sought after neighborhoods. 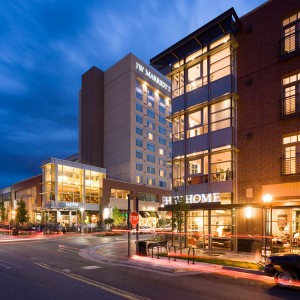 Cherry Creek North is considered to be one of Denver’s most vibrant outdoor shopping districts, and an attractive place to live or work.  It is living up to its reputation with the addition of many large scale developments such as Clayton Lane, an award winning 700,000 SF mixed-use development, which incorporated the original Sears and includes a Whole Foods, Crate and Barrel, Four Star JW Marriott, the Janus Capital World Headquarters building and 25 high-end residential condominiums.  Many other mixed- use developments such as this are underway.

Aside from shopping, Cherry Creek offers recreational and cultural activities.  The Cherry Creek path and trail, located south of the mall, is a popular recreational route for cyclists, in-line skaters, and joggers.  The Cherry Creek Sneak is an annual 5k, 5 mile or 10 mile race held the last Sunday of April and runs through the heart of the Cherry Creek District.  Live Music helps motivate runners to the finish line.  The annual Cherry Creek Arts Festival is a 3-day, world-class, award-winning celebration of art, food and music.  It attracts over 350,000 visitors each year ranging from the serious art collector to families looking for a fun way to celebrate the July 4th weekend.  Other Cultural Events include: Summer Tunes on the Plaza, and Denver Arts week. 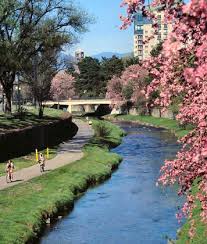 For more information on Cherry Creek homes and our Upcoming Real Estate Projects in Cherry Creek, please contact Jesse at 303-564-2245 at VintageHomesOfDenver.com