Washington Park has been a hallmark of the Denver community for over one hundred years. The park was originally a critical piece of the “City Ditch” that supplied the city’s earliest farming population. The water that ran through the now famous park, maintained the fragile crops desperate to take root in the wind blown prairie soil that was so foreign to Denver’s new citizenry. Smith Lake, which is found on the north end of the park is named for the businessman hired in 1864 to dig the original ditch. The community of South Denver sprung up around the lake and subsequent park, designed after the famous European parks made popular at the turn of the 19th century. The park would be officially named Washington Park, or “Wash” Park in 1899 as a token of respect on the one hundredth anniversary of President George Washington’s death. The garden to the north of Grasmere Lake is named for Martha Washington and is a duplication of the gardens found on the Mount Vernon estate.

Originally 20 acres of reclaimed farmland, the park grew to an impressive 160 acres by 1916. European parks featuring lily ponds, flowering beds, and treed lanes were the rage in Victorian times. Washington Park fulfilled this vision and was the recipient of talents from several designers, including Reinhard Schuetze who is responsible for Fairmont Cemetery and Cheeseman Park. Also noteworthy is Frederick Olmstead, Jr., whose grandfather designed New York’s Central Park.

The park has seen many transformations in the past century. At one time or another there were such things as outdoor fire pits, an ecology pavilion made from recycled bottles and cans, and a true “Lover’s Lane”. The lakes themselves are rich with stories and folklore of Denver’s past. Unbelievably, Smith Lake was a city oasis for bathers in the hot summer months and even boasted a high dive. The boathouse was built in 1911 at the time the lake opened to swimmers. The beach was segregated for the majority most of its 40 years, causing tension among the diverse Denver population. In the 1940’s, the lake was closed several times in response to the fear of spreading the polio virus. The lake was closed to swimming in 1957.

Smith Lake also served the Washington Park community with a lovely skating pond in the long Colorado winters. Urban legends about the lake have long been retold including stories of drowned cows, alligators and bottomless depths. 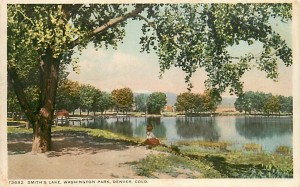 The pavilion to the south of Smith Lake is a smaller version of a palace found in Turkey. The structure was completed in 1913 and was intended to be an open-air concert hall, comfort station, concession stand and warming room. Falling into disrepair in the later half of the 20th century, the pavilion found new champions in the nonprofit group aptly named the “Park People”. With their tireless efforts, they have managed to save the pavilion and neighboring boat house. Today, the pavilion is available for community and private events, boat rentals, and concessions.

In the 21st century, Washington Park is a key component in the lifestyle of Denver. Nonprofit groups hold walk-a-thons, marathons and other charity events on the vast grounds and maintained paths. Soccer games, baby joggers, dog walkers, and tennis players are an almost constant sight, giving a sense of health and vitality in the mile high city. The neighborhood surrounding this institution of Denver life is beyond quaint. There are several architectural styles on display in both Wash Park and West Wash Park. In one block, you are sure to see examples of the four-square home (“Denver Square”), Craftsman bungalows, brick colonials, French Tudors, gabled Victorians, and the occasional contemporary. Recently, the area has been a hotbed of debate on the justification of the “out with the old, in with the new” ideal, coined “scraping” by developers in the area. While this practice grew without restraint in the 1980’s and 1990’s, the civic leaders have once again grasped the reins. There are new laws and ordinances protecting the historically significant structures in the Washington Park neighborhood, however, new construction is still prevalent.

The narrow streets are canopied with large trees, giving a sense of total seclusion from large front porches and well-manicured lawns. Once in danger in the face of change, these old giants are now protected by the city and must remain when old Denver homes are removed to make way for the new.

Thanks to the recently completed TRex project along I-25, light rail is now a viable commuting option for Wash Park residents. The light rail station is within walking distance and provides easy access to downtown Denver and the southern suburbs.

Old South Gaylord is still a bustling retail area in the heart of Wash Park, featuring an astonishing array of bistros, fine dining and retail opportunities. The area once was a streetcar shopping area offering grocery stores and butcher shops. The four blocks are a mini-downtown, and still gives a feeling of this bygone era of windowed storefronts and neon signs.

South High School is at the south end of Washington Park on High Street, is one of Denver’s original high schools. One of the cardinal direction schools, South was completed in 1926 and is positioned on 76 acres. The architecture is distinctly Italian Renaissance and even features a griffin gargoyle above the main entrance.

Washington Park and its subsequent neighborhoods is one of Denver’s most popular destinations. If you would like more information on this location, or need assistance with any Denver real estate, please contact Vintage Homes of Denver via the “contact us” link.

The Washington Park neighborhood encompasses the park’s borders, and stretches from Downing St. to University Blvd. The neighborhood is bounded by Cherry Creek Dr. to the north and I-25 to the south.