Richard Little was born in New Hampshire and trained as a civil engineer.  After years of working with the railroads, Little was hired in 1861 by the Capitol Hydraulic Company in Denver City.  The Capitol Hydraulic Company was in the process of digging the series of ditches necessary to irrigate the farmlands in and around the future city of Denver.  The series of ditches would one day be known as the Highline Canal.

While working on the ditch system, Little became enamored by the area south of Denver City along the east bank of the Platte River.  After submitting a claim for 160 acres, Little retrieved his bride, Angeline, in Chicago. They would be Littleton’s first residents.

By 1863, the area had seen an influx of people drawn to the promising agricultural landscape.  In fact, Joseph Bowles, a Fifty-Niner, conducted one of the first Littleton real estate transactions when he purchased the claim next to Richard Little, on the west bank of the Platte River.  Mr. Bowles was one of Colorado’s most successful early farmers and cattle ranchers.

In 1865, the first school house was constructed and set to work educating the new town’s young people.  The original school house, built in true log cabin style, was relocated to the Littleton Historic Museum in 1997.  It is open to the public, as well as a complete 1860’s and 1890’s homestead.

The construction of the Rough and Ready flour mill by Little and other residents in 1867 solidified the town’s existence in the Colorado Territory.  The barrels of flour produced supplied miners in the mountains and general stores in Denver. Their grain, and subsequent flour, would gain recognition as far away as Boston and New York.  The mill would ship barrels to merchants in the east, rivaling those mills that had held the market for generations.

Clashes between Littleton residents and the Arapahoe Indians were still common until 1869.  The Arapahoe conducted raids on area farms, taking livestock and produce.  Though incidences of bloodshed were rare, they were not unheard of in the region.  The Treaty of the Medicine Lodge forced most of the Arapahoe to stay in Oklahoma.  Those that chose not to remain in Oklahoma joined the Cheyenne in Wyoming.

In 1871 the Denver and Rio Grande railroad laid tracks alongside Little’s farm, thus prompting a true city to be designated.

Richard Little filed a plat for the land and mapped the townsite of Littleton.  The small town now had a post office, a school, a mill and the railroad.  Its first church was built in 1873.

By 1887, Littleton was seen as Denver’s most picturesque suburb.  Benefiting from the Platte River and Bear Creek, the area was pleasantly wooded and rural, reminding many of a proper New England village.  Avery Gallup moved into the area in 1887 and purchased 120 acres to the east of Littleton.  Named “Windermere”, this early Littleton real estate development was 400 feet higher in elevation and offered clear views of the Platte River, the Rocky Mountains and the growing city of Denver.  Gallup’s land included several artesian wells and a 35-acre lake.  After procuring another 200 acres, the Gallup family divided the land into the Windermere Gardens and Windermere Heights developments, furthering the advance of Littleton real estate.  They set aside a large tract of land for gardens and vineyards, and another 30 acres for a future resort.  The resort was seen to be a refuge for Denver residents wishing to escape the drudgery of the city.  They guests would be fed from the Gallups’ own garden, orchard and dairy.  While this dream did not solidify, the Littleton real estate development that they initiated is home to some of Old Littleton’s most coveted neighborhoods.  Their large tract of land now houses the Bemis Public Library, Gallup Park, the Carmelite Monastery and Woodlawn Shopping Center.

The 1890’s saw Littleton mature into a proper town.  After its incorporation in 1890, Littleton elected its first mayor, put together a volunteer fire department and saw the development of several businesses.  The population of 250 could boast three churches, several schools, a profitable mill, a creamery and even a pickle canning operation.  Coined “Pickletown”, the cannery was located just east of present day Broadway near the Highline Canal.  By 1900, the population had grown to 738 souls and the Littleton real estate market was experiencing its first boom. 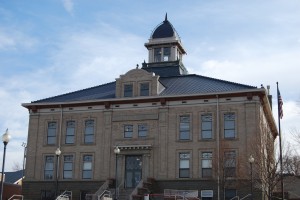 In 1902, the new county of Arapahoe was founded and Littleton was named as the county seat.  Englewood was Littleton’s greatest rival for this privilege, but was seen as Denver’s seedy playground.  With this tarnished reputation, the city of Littleton would win the election for county seat in 1904.

After electricity was brought to Littleton’s citizenry in 1903, the town was thrust into the industrial age.  The water meter was introduced in 1905, and Denver’s electric trolley line extended itself to Littleton in 1907.  That same year, the iconic county courthouse was constructed overlooking the growing city center.

The additional services available prompted a small population explosion and by 1910 the census counted 1373 people residing in Littleton.  In 1917, the city was granted a library by Andrew Carnegie.  The building still stands today and has housed not only a library, but also the town hall, a jail, and it currently houses The Melting Pot, a popular restaurant.

Throughout the 1920’s and 1930’s, Littleton was the home of many successful businesses.  The Coleman Motors Company was a forerunner in producing front-wheel drive shafts, the Red Comet company constructed fire extinguishers, and Ingersoll-Rand had a production facility in downtown Littleton until 1931.  These well established industrial plants and the trained employees within them made Littleton a vital part of Colorado’s war effort during the second World War.

After World War II, Littleton saw prosperity as a well established suburb of Denver.  Additional Littleton real estate was developed to make room for new residents.  The boom continued throughout the 1950’s, including the beginning of Chatfield Reservoir and dam, the Centennial racetrack, and the headquarters for Marathon Oil.  When Martin-Marietta, now known as Lockheed-Martin, built their facility to the southwest of Littleton, a staggering 18,000 jobs were produced within five years.  This naturally brought about the largest boom on record for the town of Littleton.

Since the 1960’s, the City of Littleton has continued to prosper.  Growing steadily each year, the city has maintained a cozy atmosphere that would seem unachievable so close to Denver.  The housing can be quite diverse, due to the slow initial growth of the town.

Most architectural styles are represented, including Victorians, Denver Squares (Four Square), and bungalows. However, there is also a plentiful supply of ranch-style homes and mid-century modern structures.  Lots are large and the landscaping is well developed.

There is a grass roots quality to the community which successfully rejected a recent attempt to install a WalMart in the vicinity. Neighbors are still very neighborly in this “small” town, and community involvement is a popular pastime.  The quaint Main Street is a historic district with a collection of home-grown boutiques and eateries whose owners live among their clientele.  The school system has also just received an Award of Distinction from the State of Colorado.

Littleton’s walkability is also an asset.  The RTD Light Rail station is in the center of town, bike paths, well-maintained sidewalks, playgrounds, and dog parks offer a buffet of possible outdoor pursuits.

As residents of Old Littleton, we cherish this area and are always happy to extoll its virtues. If you would like a tour of Littleton or any other Denver real estate, please contact Vintage Homes of Denver at 303-564-2245.